Tenotomy . . . but not in the usual fashion!

So we are having Lilybears Tenotomy today on both of her heels. For those who don't know what I'm talking about, please read the following except from a hand out I received from the IWK: "Tenotomy (needed in 80% of cases) is a release (clipping) of the Achilles tendon – minor surgery – local anesthesia" This process is usually done in the Orthopedic clinic, under local anesthesia. . . But . . . Where Lilybear was much older than most children this is preformed on, we we advised that they would put her under anesthesia, and preform the tenotomy in the OR instead. This would prevent her from squirming, and potentially causing issues while they were trying to clip her tendon. Usually children having this done are a fair bit younger than Lilybear, and thus they do not fight as hard as she does when they try and hold them still.


So off to IWK, and into a waiting area for pre-op. They weighed Lilybear, and stuck her with an IV. Lilybear was very cranky at this point as she had not been allowed to eat since 7 am. Her surgery was scheduled to start around 12pm, but she ended up having to wait for the OR as they received an emergency call. Lilybear did not get into the OR until about 3pm! Poor little thing was starving, and crying. I can just picture what was going through her head as she was entirely breast fed at this point. . . "Mom, WTF? Your boobies are right there! WHY AREN"T YOU FEEDING ME!?!?!"


We waited in the waiting room for the phone to ring to tell us Lilybear was out of surgery. Three other families were waiting as well, and of course, we were last to get our call. Lilybear was out of surgery, and in recovery. They told us that Dr. Logan would be out in a minute to let us know how everything went, but advised that Lilybear was doing great, and surgery was a success. They told us that they would come and get us when Lilybear woke up from her anesthesia. Enter Dr. Logan, our hero. He told us everything went perfect, and we may even be able to take Lilybear back to the Ronald McDonald House instead of staying at the IWK for the night, but we had to see what the anesthesiologist said. It seemed like hours and hours before they came to get us to let us see our Lilybear. . . Finally she woke up, and I got to hold her in my arms again, and feed her. She was hooked up to an IV, so wasn't very hungry. Can you tell I was happy to have my baby girl back?? 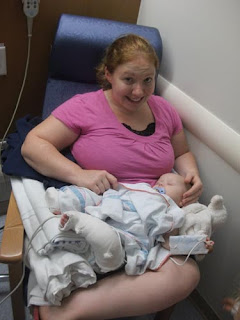 We got the go ahead from the Anesthesiologist to take Lilybear home, and we were on our way. The following morning we left for home, and spent another wonderful night with the Staff and Volunteers and families at the RMH! We love that place! These casts would stay of for a total of 3 weeks to give her tendons time to heal in their stretched position. That was fine by us, no road trips for 3 weeks! SWEET! :) And after taking this set of casts off, which would hopefully be her last set ever, we would move her into a brace which you will read about in my next entry!
Posted by TippyToes at 18:34