One of the challenges of having a baby with club foot, or any new born really is the lack of sleep. With Lilybear we had a few more challenges. . . Her immunizations have had to be delayed due to having casts over her legs where they would normally give the injections. Another struggle we have had to face is sleep, or lack of it really.

Lilybear likes to kick in her sleep. . . wouldn't be a big deal except she has big ol casts on her legs, and a metal rim around the top of her bassinet that she loves to kick. If the clanking wasn't keeping me awake, the leg cramp issues would. Lilybear has had a few leg cramps that make her very irritable, and fussy. She wouldn't settle for us, and we couldn't figure out what was wrong. She wasn't hungry, or wet, or dirty, or too hot/cold. Then one night DH laid her down on the bed and started doing the bicycle motion with her legs. . . and Lilybear laughed! Music to our ears! We had finally figured out why we had such a fussy baby at times!

We started doing this when she was cranky, and we couldn't calm her any other way. The change was immediate, and we determined she was having leg cramps from not being able to kick her legs on her own. Now if she would only start sleeping through the night.

Another tip for sleeping, we found that she would sleep the best on her belly. So we did this for nap times, and it was a huge success :) 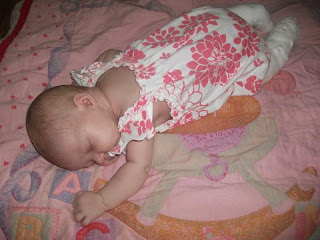